This past weekend was all about crochet! My daughter and I attended the Knit and Crochet show, put on by the Crochet Guild of America and the Knitting Guild of America, located at the Town and Country Resort in San Diego California.

On Thursday when we walked into the hotel, the first thing we saw was this big sign. 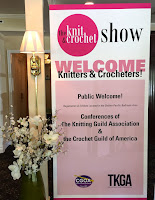 After we checked in our luggage, we went to the convention area of the hotel to check in at the conference. At check-in I was given a goody bag from Lion Brand Yarn (They were a sponsor of the show) and a schedule of events. The schedule was packed with classes, shopping, meet and greets, COGA meetings, a pool party, and a yarn tasting party.

Since it was my first time attending, I decided to take one class. I took the ARAN Crochet class taught by Karen Klemp. It was a good class and I learned to crochet cables.

There was plenty of time in between events and classes to hang out and crochet. We found a great spot to sit and crochet and met a bunch of great people. 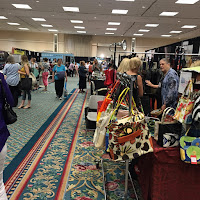 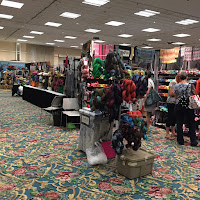 Friday was the day the shopping floor opened, there were some local yarn vendors, a yarn Truck, Red Heart yarn booth and Crochetville, just to name a few. 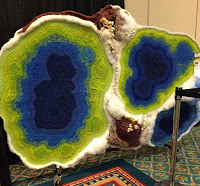 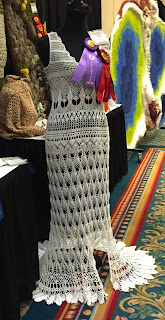 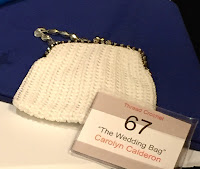 There was an area of the shopping floor with a display of designers work, there was free form crochet, dresses, purses, wraps and shawls, and even
a crochet sonogram picture! These designs are amazing! 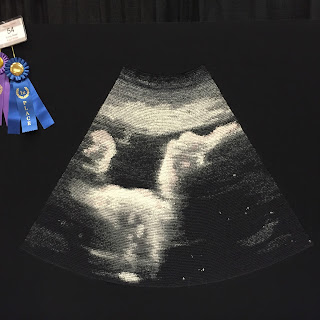 I also met someone with the most amazing watercolor crochet tattoo! This is a different kind of crochet art! 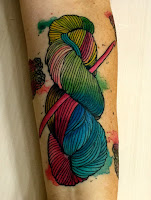 Besides shopping, crocheting, classes, meetings, and a lot of great people at the show. I was able to meet Jenny King. She is a crochet designer from Australia, who has been featured in Vogue and other crochet magazines.
She was at the show teaching here new crochet technique called Get Squared(TM). With her new technique you can create any garment in any yarn and it is guaranteed to fit every time! I was not able to take her class but she told me I could have the whole tutorial on the web or on a flash drive by going to her website Jenny King Designs. On friday night Jenny hosted a get squared pool party where she showed the many different garments using her technique and had a yarn giveaway. I can't wait to try out Get Squared(TM)!

I had a really good time at the crochet show with all the activities, classes and shopping, but it was really great to be able to hang out with my daughter and crochet!

If you ever have a chance you should go to a crochet show! The next one is in Charlotte, South Carolina. If all goes well, I hope to be there!

Have a Great Week!
Crochet on,
Da
Posted by Da's Crochet Connection at 4:51 PM